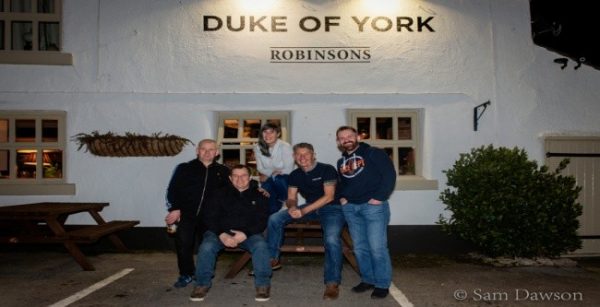 A recent fund raising evening at the Duke Of York Flag pub near Buxton generated an incredible sum of money for the Simon Andrews fund.

The program for the evening was a highly entertaining chat show, followed by an auction and raffle. Auction items such as Dan Cooper’s leathers, Jamie Coward ‘s race gloves, a guided lap of the TT on closed roads, Peter Hickman’s signed BMW fleece and at least 33 years worth of box set Duke Marketing DVDs, were only a few of the items very kindly donated, along with numerous raffle items.

Sidecar passenger: Fiona Baker-Holden, had the idea of raising the money for the Simon Andrews fund after they had very kindly helped fund some initial blocks of cryotherapy treatments for both Fiona and her father: Tony Baker following their crash at TT 2018. Fiona suffered a broken neck, torn ligaments in her lower right arm and severed nerves into her arm, while Tony suffered a broken femur. Both Fiona and Tony are currently continuing with their recovery.

Fiona would like to pass on her sincere thanks to all those who donated auction / raffle items and is extremely grateful for the generosity of their contributions and for all those who helped make the night the success that it was.